Can a community barbeque be more beneficial to citizens than learning computing skills? 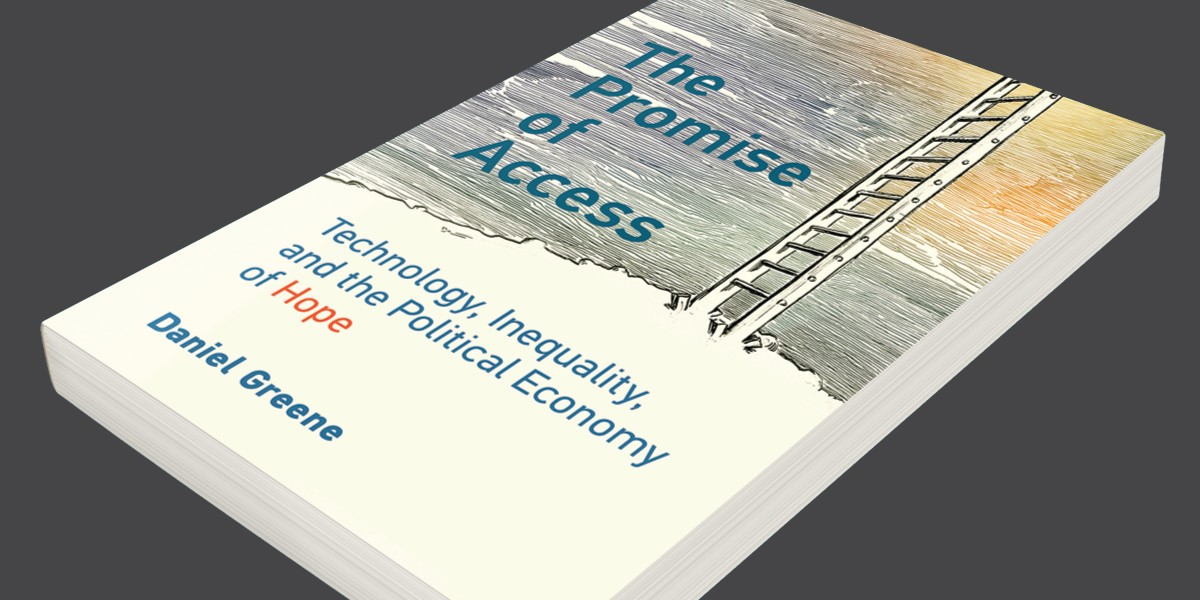 How did we learn that we need to learn to code–or else? In his new book, Dr. Daniel Greene, Assistant Professor at the University of Maryland College of Information Studies, shows that technology provision and training has become the default solution to poverty not because it has saved the poor, but because it saves the institutions that serve them.

In The Promise of Access: Technology Inequality and the Political Economy of Hope, published in 2021 by the MIT Press, Dr. Greene describes how the Clinton administration not only put computing training and internet access on the political agenda, but trained cities, states, and regions to think of their economic destiny in these terms–what he calls the ‘access doctrine.’ As the US deindustrialized, problems of outsourcing, automation, or over-policing instead were transformed into problems of skills gaps and human capital shortages. But, as Greene shows, it is analytical and critical thinking skills that have produced the greatest wage payoff since 1979, rather than technical skills. Since the 1990s, most new jobs have been in low-wage service work that does not require a college degree, particularly food and health care—not software development—and government projections predict the same for the next decade.

The Promise of Access builds on this political history with years of fieldwork within Washington D.C.’s schools, libraries, and civic-minded startups: places that prepare people for the labor market or care for them as they re-enter it. No one is here duped, Greene argues. Librarians understand the homeless patrons they serve have more complicated problems than just how to get internet access. Nonetheless, it is through their engagement with these people on the ‘wrong’ side of the digital divide that these professionals turn the problem of poverty into a problem of technology. Because these are the only terms on which these institutions can themselves survive.

Since the 1990s, institutions like schools and libraries have been completely remodeled to focus on providing computing, coding, and technology skills to community members, with the promise that this can be life changing.

But if the results aren’t there, why do schools keep reinventing their curriculum to train new computer scientists? Why do libraries keep remodeling themselves to look like Apple Stores?

Embracing this mission saves institutions who are themselves under threat and increasingly overwhelmed by the social problems they face every day. The librarian has faced decades of budget cuts, and has also had to become a nurse, social worker, security guard, nutritionist, and translator—in addition to what they were trained to do in library school. And who even needs a library when we have Wikipedia? The access doctrine provides a set of ready solutions, legible to the administrators, politicians, and donors who might relieve the pressure on the institution.

“This is the power of the access doctrine. And, from it flows new policy, new curriculum, new degrees, new jobs, new buildings,” says Dr. Greene. “The problem of poverty is so much more complicated than the digital divide, yet we’re stuck in a rut of defining poverty this way.” A vicious cycle develops, where the people the institution is meant to serve are increasingly marginalized by it, because they don’t fit that mission. Greene captures this dynamic with dozens of human stories and simple questions with no clear answer, such as who is allowed to sleep in the library.

By comparing these different institutions and the story of the people in them, Dr. Greene explains this pattern through three organizational tendencies: 1) Professionals’ tendency to generalize from their own biographies; 2) the importance of ‘bridging organizations’ like Teach for America which present private sector examples to public servants; and 3) ambiguity in public service missions that leads to desperate searches for successful models.

Ultimately, this is not a fight that schools and libraries can win—our precarious labor market is beyond their control. So Greene instead proposes a political solution. Rather than schools and libraries continuing to bring helper and helped together in an unequal relationship and continuing to offer students and patrons a technological life raft, instead librarians and teachers can organize alongside those who need help to demand the space and resources the whole community needs.

The Promise of Access received the McGannon Book Award honoring the best book published in 2021 concerning media policy, activism, and social justice precisely because it reframes the problem in these terms. To save themselves, schools and libraries cannot continue to approach the people they serve as a problem to be solved. Rather, they must be allies in the struggle to redesign our institutions to empower our communities and make the world we want.