After 50 years, Trace Founder and Director Gregg Vanderheiden passes the gavel to a new director to carry the Trace legacy of accessibility research, policy, and impact into the next half century. 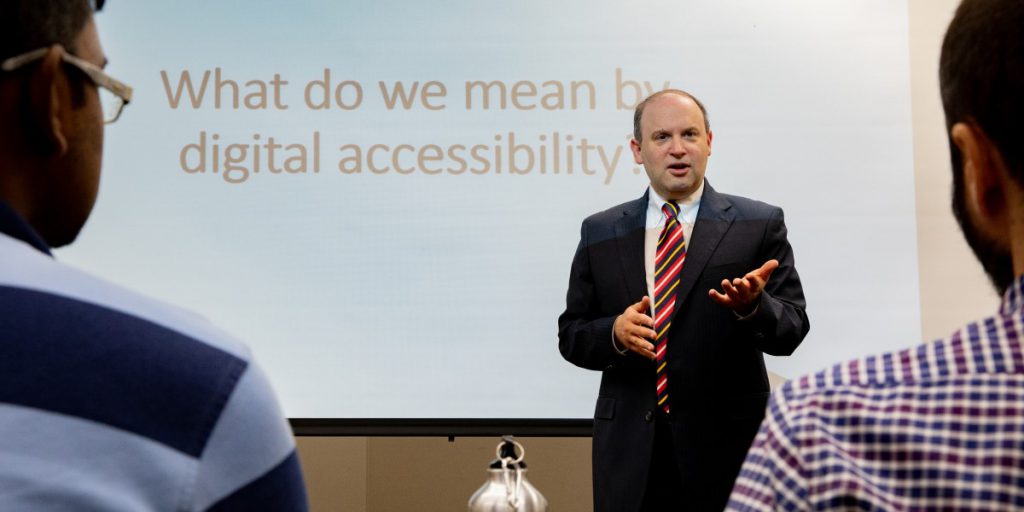 Since 1971, the Trace Research and Development Center has been a pioneer in accessibility, at the intersection of technology and disability. Its mission is capitalizing on the potential that technologies hold for people experiencing barriers due to disability, aging, or digital literacy, and prev ]]>
<![CDATA[ enting emerging technologies from creating new barriers for these individuals. As Trace celebrates a remarkable half century of impact, its founder and director, Dr. Gregg Vanderheiden, is passing leadership of the center to Dr. Jonathan Lazar, professor in the College of Information Studies (iSchool) at the University of Maryland (UMD) and associate director of Trace since 2019.

A virtual passing of the gavel occurred during the Trace Center’s monthly gathering of faculty, students, and staff on October 4, 2021. Dr. Vanderheiden remarked: “We are extremely lucky to have someone with Dr. Lazar’s depth and breadth of work in the field to take on the directorship of the Trace Center. From research to policy to his work with industry and deep roots in the disability community, Dr. Lazar comes to the role with all of the characteristics that have made the Center great over the last 50 years. I can think of no one who is better suited to take on directorship of the Trace Center going forward.”

The Trace story begins in 1971 when a small group of undergraduate students in Wisconsin, led by Gregg Vanderheiden and David Lamers, came together to devise a solution for a young boy with cerebral palsy who was nonspeaking to communicate in a less onerous and more effective way by utilizing technology. That group and their work evolved into what became the Trace R&D Center at the University of Wisconsin-Madison. Gregg and his colleagues imagined into reality a more accessible future for one boy, and then others, and over the decades turned their attention to the accessibility of personal computers, mobile devices, web content, and technology used in every aspect of daily life, from ATM machines to airport kiosks.

In 2016, the Trace R&D Center moved from the University of Wisconsin-Madison to its new home at the iSchool at the University of Maryland. A natural fit for the Trace Center, the UMD iSchool situates itself and its work at the intersection of people, information and technology, with a history of commitment to universal access, user-centered design, and real-world impact that fosters community and empowers individuals.

In 2019, Dr. Jonathan Lazar joined the Trace Center as associate director and as a co-investigator of the $4.625 million, five-year Rehabilitation Engineering Research Center (RERC) grant the Trace Center received from the National Institute on Disability, Independent Living, and Rehabilitation Research (NIDILRR), a part of the Administration for Community Living, U.S. Department of Health and Human Services. 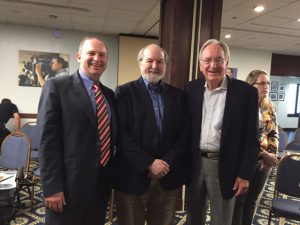 An internationally known expert in the field of digital accessibility, Dr. Lazar has contributed to the field of human-computer interaction (HCI) for more than two decades since completing his Ph.D. in Information Systems. Before joining the faculty of the UMD iSchool and the Trace Center, Dr. Lazar served as a professor of computer and information sciences at Towson University for 19 years, including 14 years as director of the Information Systems program.

During the 2012-2013 academic year, he was a Fellow at the Radcliffe Institute for Advanced Study at Harvard University, where he did research at the intersection of human-computer interaction for people with disabilities and disability rights law. His expanding interests in public policy and disability rights law led Dr. Lazar to pursue an LLM degree at the University of Pennsylvania Law School, which he completed in 2018. Dr. Lazar is the author or editor of 14 books on human-computer interaction and accessibility, including the forthcoming Accessible Technology and the Developing World (Oxford University Press), and he frequently serves as an adviser to government agencies and regularly provides testimony at federal and state levels.

Disability rights attorney and former Deputy Assistant Attorney General of the U.S. Department of Justice, Civil Rights Division, Eve Hill remarked: “Dr. Lazar understands that knowledge can have an impact on societal change, asking research questions that need answering, and delivering data that informs policymakers, advocates, and others. His research work is widely read among those who work on disability policy in Washington, across the country, and around the world. As director of the Trace Center, Dr. Lazar will bring his passion and diligence to the work, and an extraordinary adeptness at bridging the divides of language, understanding, and perspective among computer scientists, attorneys, policy makers, and individuals with disabilities.”

Dr. Lazar is also an active member of ACM SIGCHI, ACM SIGACCESS, and the Disability Rights Bar Association, and received the 2016 ACM SIGCHI Social Impact Award, the 2020 ACM SIGACCESS Award for Outstanding Contributions to Computing and Accessibility, and in May 2021 was elected to the ACM SIGCHI Academy, a group of principal leaders of the field, in honor of his substantial contributions to the field of human-computer interaction. This month, he is serving as the general chair of the ACM ASSETS 2021 conference, the most prestigious conference on digital accessibility research.

On the transition from Dr. Vanderheiden to Dr. Lazar as director, Dr. Clayton Lewis, Emeritus Professor at the University of Colorado Boulder, remarked: “Jonathan has shown over many years a fierce dedication to serving the interests of people with disabilities. As a researcher he has contributed seminal studies in many areas, including computer use by people with cognitive disabilities, and monitoring the state of the art in Web site accessibility, that have influenced many. That Jonathan has taken the unusual step of adding legal qualifications to his technical background shows his commitment to following important problems wherever they lead, regardless of discipline boundaries. Trace will be in excellent hands with Jonathan!”

IBM Accessibility Program Director, Shari Trewin, “can’t think of a better person to take over direction of the Trace Center.” She describes Dr. Lazar as “a passionate advocate of equal access,” who “is uniquely qualified to maximize the impact of technology advances for access through his legal and policy expertise. Expect a future as profoundly influential as its past under Gregg Vanderheiden’s leadership.”

Maria Town, President and CEO of the American Association of People with Disabilities, concurs, saying that “Dr. Jonathan Lazar is one of the nation’s foremost experts on accessible technology. I a
m confident that with his leadership the Trace Center will continue to capitalize on the potential that technology holds for people with disabilities and advance equity-centered solutions in our rapidly changing world.”

University of Washington computer science professor and co-director of UW CREATE (Center for Research and Education on Accessible Technology and Experiences), Jennifer Mankoff, notes that Dr. Lazar “shares Dr. Vanderheiden’s commitment to accessibility thriving everywhere, not just at Trace. He is a highly respected, dedicated and caring scholar who chooses high impact problems with significant practical impact. Further, his commitment to service is exemplary, and is reflected in his long-time volunteer work within the community, his choice to get a law degree to further inform his practical work, and the many awards he has received. You’re lucky to have him!”

For 50 years, the Trace Center has maintained two fields of vision: the immediate needs of and barriers facing people with disabilities, and the future where new technologies facilitate connection and community participation by all. With Dr. Lazar as director, the team at the Trace Center, including Drs. Gregg Vanderheiden, J. Bern Jordan, Hernisa Kacorri, and Amanda Lazar (no relation to Jonathan Lazar), 10 affiliate faculty, and 15 graduate students, stands poised to carry that vision into the future. Today’s team remains committed to the same principles that compelled Gregg Vanderheiden and the original Trace team 50 years ago to work with a young boy to enable him to communicate, write, and participate more fully in his community alongside his peers. That commitment is rooted in the fundamental belief that finding solutions to problems of accessibility improves not only the lives of those of us with disabilities but all of our lives by building a bigger, more inclusive, more diverse, more productive, and more interesting community and society.

As Dr. Lazar notes, “The work of the Trace Center, which appears in billions of devices used by people with disabilities every day internationally, has improved the quality of life worldwide for people with disabilities. We have a great team of researchers who are all passionate about accessibility, and I am honored to be continuing the tradition of excellence and impact.”

Original article can be found here.