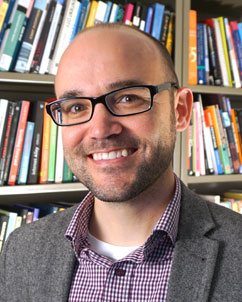 Jason Farman is a Professor of American Studies and the Director of the Design Cultures & Creativity Program. He is also a faculty member with the Human-Computer Interaction Lab and a Faculty Associate with Harvard University’s Berkman Klein Center for Internet & Society. He is the author of the book Delayed Response: The Art of Waiting from the Ancient to the Instant World, which was awarded an Alfred P. Sloan Foundation Grant for the Public Understanding of Science and Technology. He is also the author of Mobile Interface Theory, winner of the 2012 Book of the Year Award from the Association of Internet Researchers. He is the editor of the books The Mobile Story (2014) and Foundations of Mobile Media Studies (2016). His work has been featured in The Atlantic, the BBC, the Wall Street Journal, the New York Times, NPR, 99% Invisible, Atlas Obscura, Aeon, Vox, and others.