Where in the World (Wide Web) is the Trace Center?

The UMD iSchool celebrates the Trace Center’s 50th Anniversary highlighting some of its most influential technologies and industry standards developed to create a more accessible world for all. 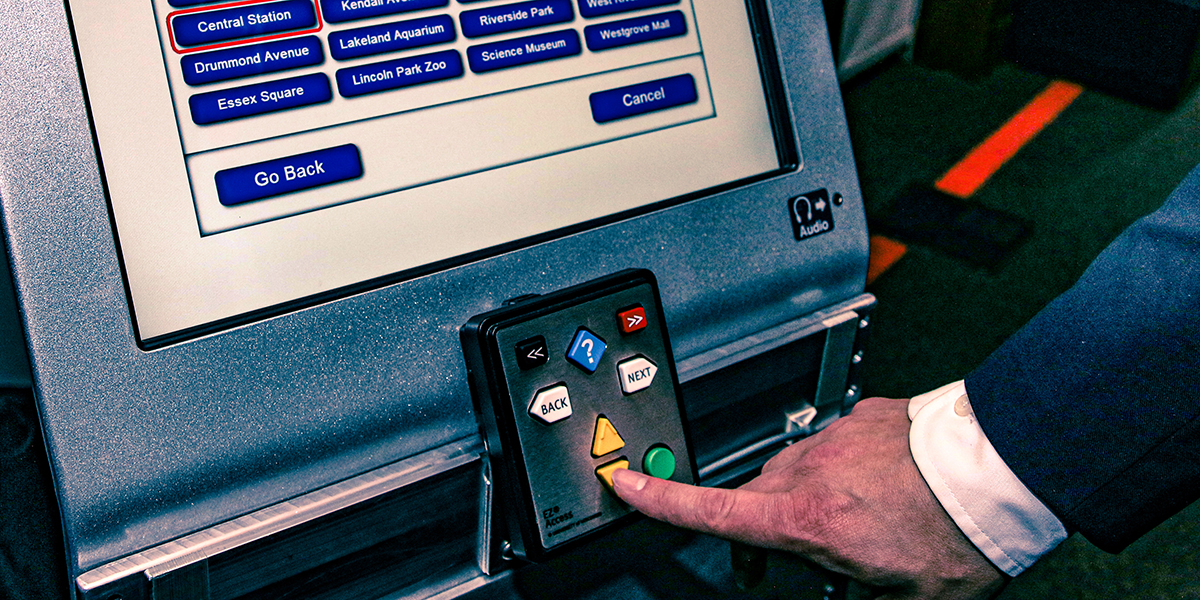 Prototype of the EZ Access keypad incorporated into a ticket kiosk

Since 1971, the Trace Research & Development Center has helped millions of people interact with the world using common everyday devices, like telephones and computers. Originally formed to address the communication needs of people who were nonspeaking and had severe disabilities, the Trace Center has been a producer of cutting-edge research and technologies that can be found in billions of devices used by people with and without disabilities around the world.

Throughout the month of July, the iSchool will be highlighting some of the Trace Center’s most prominent innovations that have shaped the ways we interact with everyday technologies and created a more accessible and usable world for people of all ages and abilities.

The Trace Center’s EZ Access® package of accessibility strategies has been implemented directly in public information systems and was critical in the development of more accessible ATMs and self-service kiosks to complete transactions. EZ Access® has provided people with disabilities more autonomy in their day-to-day lives and necessary access to modern amenities, especially while traveling.

The subsequent development of EZ Access 2 eliminated the need for multiple accessibility modes. EZ Access can be found in:

The Trace Center also played a fundamental role in the development of modern day voting machines. The Center’s original prototypes first developed in 1999 were featured in demonstrations on Capitol Hill and at the White House, as well as during a keynote given by Microsoft’s Steve Ballmer at the FOSE trade show.

If your device runs on MacOS, iOS, or Windows operating systems, you’ll find tools developed by the Trace Center that help make these devices more accessible to people with disabilities — from hearing and vision impairments to physical disabilities. This work first showed up in Apple IIGS and Macintoshes starting in 1987, was incorporated in Microsoft’s first accessibility support program for Windows in 1988, known as Access Utility for Windows 2.0, and was built directly into Windows in 1995.

Some of the accessibility features introduced by and licensed royalty-free from the Trace Center to Microsoft, the government, and others include:

From user-experience design and computer science, to content creation and casual internet surfing, you’ve had exposure to some form of the Web Content Accessibility Guidelines, or WCAG. Gregg Vanderheiden, co-founder and director of the Trace Center, wrote the first set of accessibility guidelines for web content in January 1995 just after the Second International Conference on the World-Wide Web (WWWII). When more than 36 different guidelines were introduced by others over the next several years, the Trace Center brought the guideline documents together, working out the discrepancies and creating the Trace Center Unified Web Accessibility Guidelines in 1997, which became the starting point for WCAG 1.0 released in 1999. WCAG 2.0 was published in 2008, again with leadership from the Trace Center which provided one of the co-chairs and two of the four editors.

WCAG provides web content creators and developers both simple and more complex solutions for making web content accessible. For example, if an image has alt text, or a short written description, then screen readers used by the blind or visually impaired can utilize the content, and captioning of video content affords accessibility for Deaf or hard of hearing users.

Trace’s work can also be found in a wide range of other devices, software, and standards across all sorts of digital technologies.

The iSchool is currently running its #WheresTrace Photo Contest! To enter, tag your pics showing Trace technology with #WheresTrace and your location on Instagram, Facebook, or Twitter by August 31 at 5pm EST. 1st Place wins big: a $50 Amazon gift card! 2nd and 3rd Place winners will each receive a $25 Amazon gift card.

You can also submit your pics here.

A curated collection of the submitted photos will also be put in a gallery and displayed on the Trace Center website.