Abujana and Fuentes are among the American Library Association’s 60 Spectrum Scholarship award recipients for 2021. 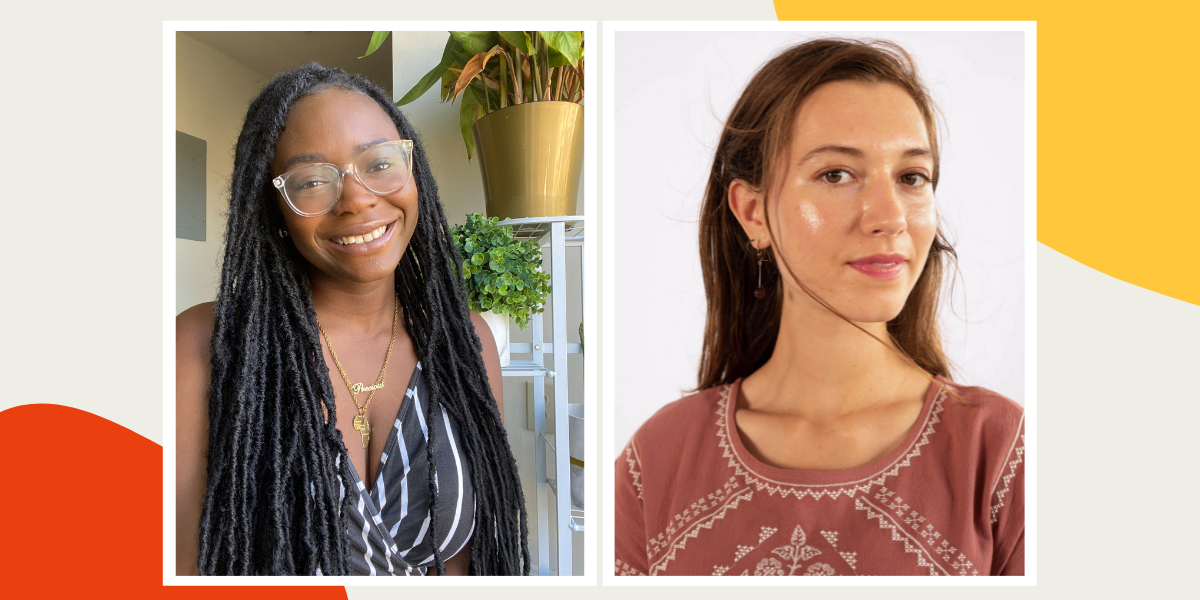 The iSchool is thrilled to announce Precious Abujana and Andrea N Gutmann Fuentes have been awarded two 2021 ALA Spectrum Scholarships by the American Library Association’s (ALA) Office for Diversity, Literacy and Outreach Services. Since 1997, the Spectrum Scholarship program has provided more than 1,300 awards to students from ethnically under-represented backgrounds to address the critical need for diversity and inclusion in library and information science (LIS) fields.

Through this program, the ALA affirms its commitment to diversity and inclusion by seeking the broadest participation of new generations of racially and ethnically diverse librarians to position ALA to provide leadership in the transformation of libraries and library services.

Precious Abujana is currently a full-time student in the Master of Library and Information Science (MLIS) program whose interests lie at the intersection of literature, research, and public service, particularly with underserved and underrepresented communities. Precious fell in love with her work at the Parkville-Carney Library branch located in Baltimore County, MD, an unexpected shift from her initial plan to land a career in public health after earning her Bachelor’s degree in Health Science from Towson University in 2018.

“To know me is to know my love for literature runs deep. [As a] quintessential book nerd, I’ve always been obsessed with books, but never really seriously considered a career in the field until I got a part-time job as a Shelver in 2014. At the time, I didn’t need the MLIS degree, but I knew I would eventually if I chose to remain in the field.”

After many discussions with UMD alumni and her co-workers who shared their own MLIS experiences, Precious came to the conclusion that an MLIS degree was crucial to advancing her professional career in librarianship. Enamored by the iSchool’s nationally-ranked programs and specializations, particularly its 5th ranked Youth Experience (YX) Specialization, and with its flexibility to complete her degree completely online, Precious enrolled in the Master of Library and Information Science (MLIS) program in the Fall of 2020.

While pursuing her MLIS degree, Precious held a Graduate Teaching Assistant position at the iSchool and worked part-time at the Towson Branch of the Baltimore County Public Libraries (BCPL) where she’s been employed since 2015. In April 2021, she was promoted to a full-time Librarian II at the Towson Branch.

From presenting Precious with her first library card at the age of 10, to proofreading her statement of purpose needed for her graduate school application, Precious’s mother, a single parent and immigrant, helped instill in Precious her intrinsic love of libraries and helped support her through her academic and professional endeavors. “She’s dedicated her whole adult life to building a future in which her children feel safe and supported enough to follow their dreams. She’s never really understood my obsession with books or libraries, but has wholeheartedly supported my every endeavor anyways.”

Upon graduating in the Spring of 2022, Precious plans to stay in public libraries for the long-term and would eventually like to land in a position where she can plan and implement system-wide programs and initiatives for youth.

In her free time (and when she’s not reading!)Precious enjoys journaling to help organize thoughts and interests, and improve her mental health. She also loves adventuring to different cities and countries, and will make time to visit their various libraries – one of her favorite experiences so far has been getting to explore the British Library in London.

Andrea N Gutmann Fuentes is a first year student in the History & Library and Information Science (HiLS) dual-degree program with the intent to pursue academic librarianship or archives. She has particular interests in studying Chile’s labor history in the mid-20th century and labor in the U.S. at the turn of the century. She became interested in pursuing a library science degree while working at the Ohio History Service Corps (OHSC), an AmeriCorps program dedicated to preserving local history across the state of Ohio, where she had the opportunity to work alongside librarians and archivists to learn about their day-to-day work researching local history.

During her service at OHSC, she also worked with many community members who spent their evenings and weekends at libraries and archives researching local history and traveled to the various libraries and archives across the Cincinnati region. Before her two years with the OHSC, Andrea studied Linguistics and Comparative Culture Studies, with a minor in Spanish, at Ohio State University.

“I love studying history, but I also wanted to develop the skills that would allow me to help others investigate the histories that are important to them. It is inspiring to be surrounded by peers who are interested not just in studying history, but also in making historical knowledge and scholarship accessible to the public.”

Andrea says one of her biggest inspirations is her mother, who was raised in a family of 10 in the south of Chile and immigrated to the United States after marrying Andrea’s American father. Despite having to quickly learn how to navigate American life without English-speaking experience, Andrea’s mother insisted on teaching Andrea and her sister Spanish while growing up, which helped to instill an appreciation for both sides of their heritage.

“I see her as a big reason for why I am pursuing librarianship today – she used to take us to the Cincinnati Public Library all the time while growing up.”

Upon graduating in the Spring of 2024, Andrea would like to find a job in an academic library, in a museum or cultural institution’s library or archive, or in a public library’s history or genealogy department. She is currently active in multiple reading groups on campus and has plans to become more involved with LIS-focused student groups, such as the Student Archivists at Maryland, in the upcoming semesters.

Andrea has played violin since she was 7 years old and has recently dedicated more practice time during the pandemic. In her spare time, she also enjoys running and basking in the outdoors.

For more information about the program, check out the ALA’s official announcement.