Free, virtual women's suffrage exhibits compiled in honor of Women's History Month and the 100th Anniversary of the 19th Amendment. 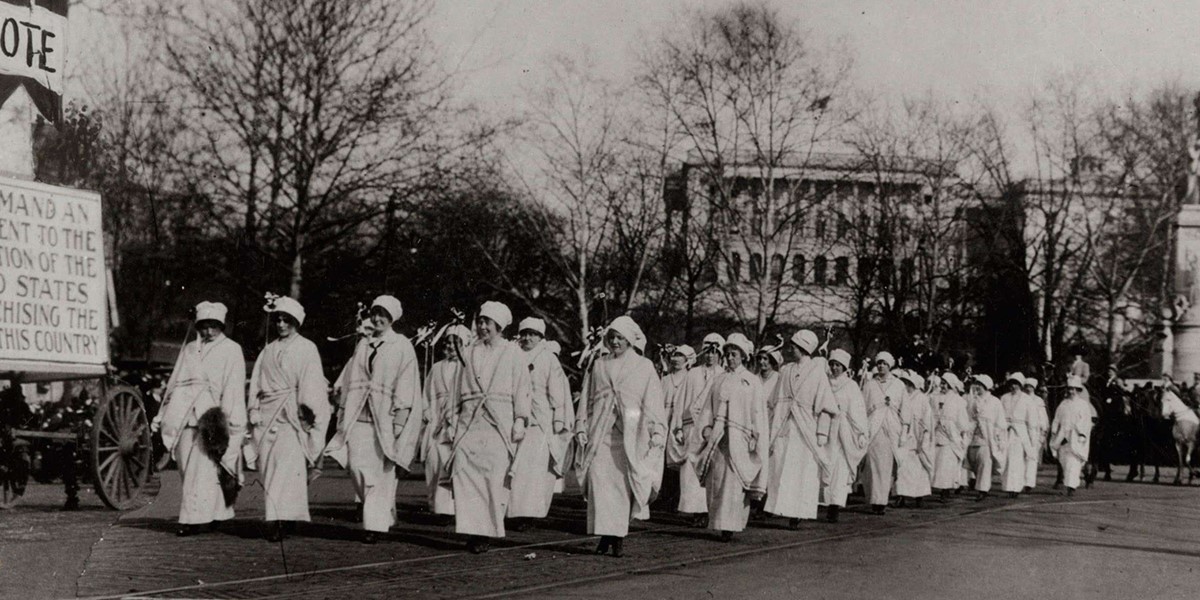 Also, join us 3/31, noon for A Century of the 19th Amendment: Perspectives on Women’s Rights in the U.S. Free, virtual talk w/ the Pew Research Center on Pew survey results re: perceptions about women’s rights.

In August 1920, millions of women won the right to vote with the ratification of the 19th Amendment to the U.S. Constitution, prohibiting the states from denying the right to vote on the basis of sex. This year, as a part of Women’s History Month, the UMD iSchool is celebrating the 100th anniversary of this major milestone in American history. As part of this initiative, the University of Maryland College of Information Studies (UMD iSchool) has compiled a list of free, virtual women’s suffrage exhibits and collections:

Representation with a Hyphen: Latinas in the Fight for Women’s Suffrage

A story of Latina’s bicultural political engagement and experience in the United States. Presented in partnership with the National Women’s History Museum and NBCUniversal Telemundo Enterprises’ “Unstoppable Women” initiative.

The 1913 Woman Suffrage Procession through Washington, DC completely changed the way protests were viewed and carried out by the American public. Thousands of women took to the streets to fight for their right to vote. Their parade from the US Capitol to the Treasury Building set the precedent for future protest marches.

Votes for Women: The Making of a Movement

What actions will you take to shape our democracy? On the 100th anniversary of the ratification of the 19th Amendment, find your inspiration in these stories of Minnesota women.

A Centennial of Women’s Suffrage

Learn about women who made deep and lasting contributions to human rights through student portraits and essays fo leading figures of the Suffrage Movement and their own families,

Iroquois women of the Six Nations Confederacy and the matrilineal culture of the Haudenosaunee exerted a profound influence on early feminists Elizabeth Cady Stanton, Matilda Joslyn Gage and Lucretia Mott — and helped to shape their vision of women as equals.

Hidden Figures of the Suffrage Movement

Visual culture related to women of color and their struggle to obtain voting rights is extremely rare. In recognition of this fact, the Brandywine has asked five talented artists to create portraits of fourteen suffragists deserving of recognition.

Rightfully Hers: American Women and the Vote

The 19th Amendment is a landmark voting rights victory, but it did not open the polls to all women. Millions of women remained unable to vote for reasons other than sex. Rightfully Hers highlights the relentless struggle of diverse activists throughout U.S. history to secure voting rights for all American women.

Nevertheless, They Persisted: Women’s Voting Rights and the 19th Amendment

Through videos and an interactive timeline, the Oregon Historical Society commemorates the bravery of women activists and shares the many ways Oregon history connects to the national history of woman suffrage.

The papers of educator, lecturer, suffragist, and civil rights activist Mary Church Terrell (1863-1954) consist of approximately 13,000 documents and 25,323 images.  With the bulk of the material concentrated in the period 1886-1954, the collection contains diaries, correspondence, printed matter, clippings, and speeches and writings, primarily focusing on Terrell’s career as an advocate of women’s rights and equal treatment of African Americans. (Much of this transcription was organized by UMD iSchool Assistant Professor Victoria Van Hyning in her previous role at the Library of Congress.)

Women of Protest: Photographs from the Records of the National Woman’s Party

This image and article collection depicts the tactics used by the militant wing of the suffrage movement in the US—including picketing, petitioning, pageants, parades and demonstrations, hunger strikes, and imprisonment. The photographs document the National Woman’s Party’s push for ratification of the 19th Amendment as well as its later efforts for passage of the Equal Rights Amendment.

After the 19th Amendment: Women in the US Virgin Islands Secure the Vote

Although the Danish West Indies came under the control of the United States in 1917, the men and women on the islands were not granted U.S. citizenship until 1932. It was from there that a pathway opened for all women on St. Thomas to obtain the right to vote, pursued by a group of politically and socially active women.

Get Out the Vote: Suffrage and Disenfranchisement in America

One of the driving forces behind the American Revolution was demand in the colonies for a representative government free from the tyranny of the British monarchy. Since then, arguments about the nature of American democracy and who has the right to vote have been at the forefront of our nation’s politics. These debates over suffrage and the laws surrounding them, are the foundation of the American political system.