Using Cell Phones to Learn How We Respond to Natural Disasters 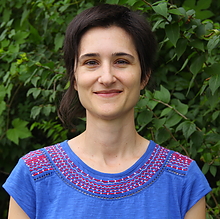 A series of deadly California wildfires spurred by dry timber and warmer climates. Devasting floods in Europe that killed dozens and displaced thousands. Severe drought in Kenya that has left a half million children suffering from malnutrition.

These are several examples of extreme weather events that impacted more than 60 million people worldwide in 2018, according to a report published earlier this year by the United Nations.

How people react to these type of events—and their interactions with built environments like cities and landscapes affected by accelerating climate change impacts—are of intense interest to a University of Maryland data scientist.

Vanessa Frias-Martinez, an assistant professor in the College of Information Studies, Maryland’s iSchool, is analyzing large amounts of mobile data to quantify the impact that natural disasters have on communities. She is using this same data to build models for emergency preparedness teams to use in future disaster scenarios.

“The focus of my work is to build mathematical models that explain human behavior,” says Frias-Martinez, who has an appointment in the University of Maryland Institute for Advanced Computer Studies. “That is, how do humans interact with the built-in environment in cities, and how might those interactions change due to events like natural disasters, economic crises, or forced migrations?”

Originally from Spain, Frias-Martinez attended Columbia University in New York for her master’s and doctoral degrees. She then moved back to Spain to work as a researcher for one of the world’s largest phone companies, Telefónica, before relocating to Maryland where she now leads the Urban Computing Lab in the iSchool.

One of the lab’s projects has been to use cellphone data to analyze displaced communities on a global scale. Her team has looked at migration patterns of people displaced by floods in Uganda and Mexico, droughts in Columbia, and used other mobile data to create socio-economic maps of Guatemala.

The models she builds usually have an accuracy rate of 70 percent or more, she says, adding that emergency responders can apply the basic models to different cities with similar characteristics, or countries where comparable cell phone data may not be available.

“If there is going to be a drought next year, for example, can you predict where people are going to go?” she asks. “If we have this type of data [beforehand], then you can actually put in place resources like shelters.”

Part of her work in data science is supported by a National Science Foundation (NSF) CAREER award, one of the nation’s most prestigious honors for early-career faculty.

Frias-Martinez and a team of students have also been analyzing geolocation data of Twitter users that were displaced by Hurricanes Irma, Maria and Harvey in 2017.

“We’re interested in seeing not only the immediate impact in terms of displacement, but also how long does it take for communities to recover, or acquire different behaviors,” she says.

Hong says her favorite part of working with Frias-Martinez is the encouragement she receives, always being pushed to keep the big picture in mind when analyzing data.

“[Frias-Martinez] always has great ideas about which direction to go,” says Hong. “She’ll ask, ‘Do you think it is meaningful to do that? Can you relate it to some kind of practical questions instead of just working on this data?’ She taught me a lot about this high-level thinking.”

Although Frias-Martinez’s research usually has an international focus, she has recently applied her passion for cycling and knack for analyzing data to Washington, D.C., where she currently lives.

Dubbed the Cycling Safety Project, students in her Urban Computing Lab created an interactive color-coded map of the safest streets to bike in the nation’s capital.

The students biked around the city with Go Pro cameras on their helmets, then uploaded their videos to a crowdsourcing website where nearly 200 D.C. residents rated how safe the streets appeared for cyclists. Next, the students combined their own data with open-source data sets such as parking violations and crime rates.

Crunching all of the data together has allowed the team to identify D.C.’s safest streets for cyclists.

Doctoral student Jiahui Wu presented a paper on the project at an IEEE conference in December.

Communicating directly with cyclists through outreach events was his favorite part of the project, says Wu.

“They were very excited about what we were doing, and I can feel the value of our data driven approach to cycling safety,” he says. “It’s very rewarding to find that this data project can have an impact on the real world.”

Baltimore is another locale where Frias-Martinez wants to apply her data collection techniques.

Through a $100,000 NSF planning grant, she and a team of researchers interviewed low-income Baltimore residents on how to meet their needs with smart city solutions.

“It’s been the smallest grant I’ve had from NSF, but it’s been the most useful,” says Frias-Martinez.

The planning grant allowed her team to use a “human-centric” approach by developing relationships with community organizations and residents, as opposed to just trying to incorporate the latest technologies into the city.

“If you look at smart cities right now in the U.S. and elsewhere, the planning is heavily focused on the technology side,” she says. “How many different sensors can we put in a city? Can we have a smart light, a smart trash can, and a smart kiosk in the corner?”

But those technologies might not necessarily help the people who are most in need, she says. For example, residents said that they would not stop and look at a smart kiosk in West Baltimore out of safety concerns.

“I don’t think anyone had sat down with the people in the city to understand their real needs,” Frias-Martinez says. “But [those needs] were pretty obvious things—like the fact that public transportation was not reliable.”

Focusing on transportation, Frias-Martinez is hoping to apply her GPS data collection techniques to Baltimore by showing show that it might take an individual several busses, and numerous hours, to reach their destination. This type of quantitative data would add to the qualitative data of resident complaints that her team has already collected.

Frias-Martinez’s team is currently in the process of submitting several grant proposals to hopefully put their ideas into action in Baltimore.

“Data science can make a difference in people’s lives. We think that is what good science is all about,” she says.