Alumni Spotlight: A Visionary in the Valley: An Alumna’s Journey to the Globe’s Center for Tech Innovation – Solace "Lacey" Arevalo-Sabado, HCIM ‘19

Solace “Lacey” Arevalo-Sabado, HCIM’19, held an unflinching dream to make a name for herself in arguably the nation’s most recognized tech hub, Silicon Valley. This ambition helped to launch her successful career in the rapidly evolving user-experience (UX) industry. Prior to attending the UMD College of Information Studies (iSchool), Lacey worked in the Technical Program Management at Procter & Gamble Company (P&G) in the Philippines after graduating with her undergraduate degree in computer science. 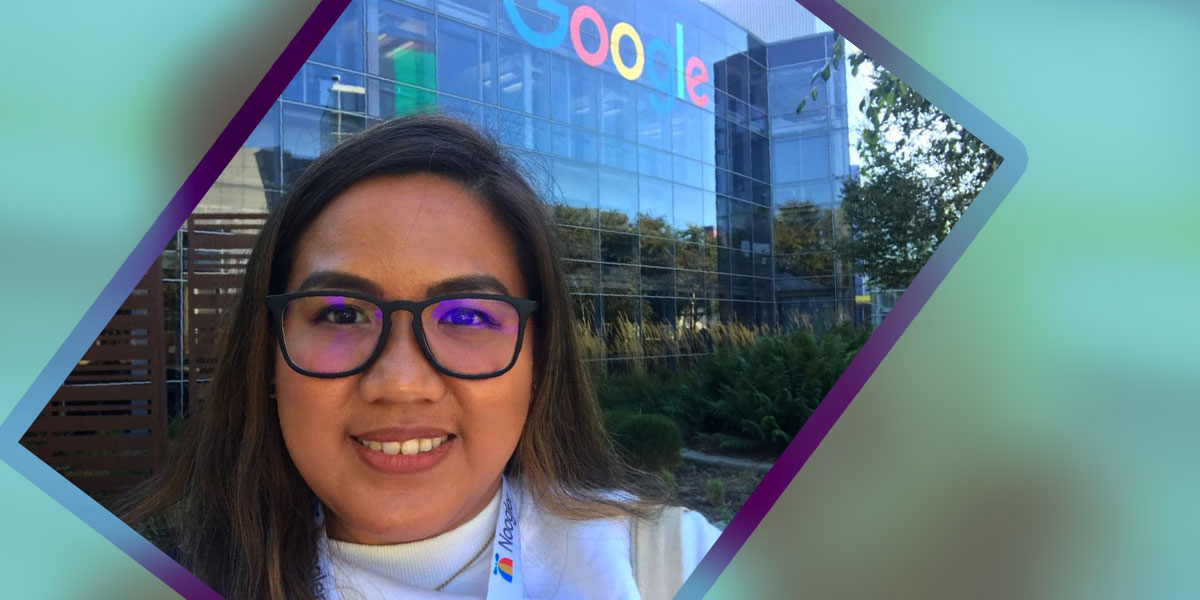 Solace “Lacey” Arevalo-Sabado, HCIM’19, held an unflinching dream to make a name for herself in arguably the nation’s most recognized tech hub, Silicon Valley. This ambition helped to launch her successful career in the rapidly evolving user-experience (UX) industry. Prior to attending the UMD College of Information Studies (iSchool), Lacey worked in the Technical Program Management at Procter & Gamble Company (P&G) in the Philippines after graduating with her undergraduate degree in computer science. During this time in her professional career, she felt a growing interest in the creative and human side of technology, which led to her decision to pivot to UX and pursue a Master’s in Human-Computer Interaction (HCIM) in the United States.

During her first day of a programming class taught in her undergraduate program, Lacey remembers watching “Pirates in Silicon Valley.” Her classmates favored Bill Gates over Steve Jobs, because he was more technical, but Lacey, on the other hand, says, “I admired Steve Jobs because of his imagination, instinct and knack for design. My decision to pivot to UX from engineering is largely influenced by leaders like Steve Jobs who advocated for design and function.”

“The code under the hood makes products functional, but it’s the design at the surface that has the power to delight and touch the human emotions.”

Lacey was the oldest and possessed the most industry experience in her HCIM cohort. At first, she thought this might hinder her from learning as many new things compared to the younger students, but she was wrong. She gained a myriad of UX and research skills, while having the chance to advance her strong project management and moderate design skills, which led her to her career today.

“The program gave me the rigorous research training that allowed me to get a research internship with the New York Times,” says Lacey. “Through the program, I was able to explore different facets of UX: research, design, writing, engineering and even research operations. Through projects, I gained deep empathy for all UX roles and I was able to test and discern where I want to take my UX career.”

Lacey co-founded the first student UX organization, UXTerps, and also served as a Graduate Assistant where she was able to apply what she learned from courses to her classmates’ student experience. She dedicated her student life to create opportunities and programs for HCIM students and won Most Outstanding Graduate Assistant in 2018.

As a UX Program Manager for Google, she has a hand in positively impacting users’ experience, applying the skills built up at the iSchool. Within her first year at Google, she launched and scaled a program that allowed cross-functional teams, including engineers, Product Managers, UXers, and Google executives to take part in group interactions that increase their user empathy for YouTube’s viewers, creators and advertisers.

As the Graduate School Commencement Speaker in 2019, Lacey reflected on the experiences, relationships, and opportunities afforded to her through the iSchool’s community and felt humbled to leave her contributions behind for future generations of HCIM students.

Lacey advises students to have patience and be prepared to embrace the apprentice mindset. “Your research and design projects may take a lot of time and feel like it’s a lot of work, but it’s worth it,” she remarked on the challenges she overcame as she paved her way into the UX industry.

“In the real world, there will always be constraints in time or budget and technical infrastructure that can be a blocker, but you have to be headstrong to champion the users amidst all that.”

Formerly an ironman triathlete, Lacey enjoys her free time as an avid traveler, a self-titled adrenaline junkie, and a theater geek who loves anything involving the arts and culture. Recently, she’s on the path to master the game of chess. Beth Harmon better watch out – there will be a new Queen’s Gambit in town!