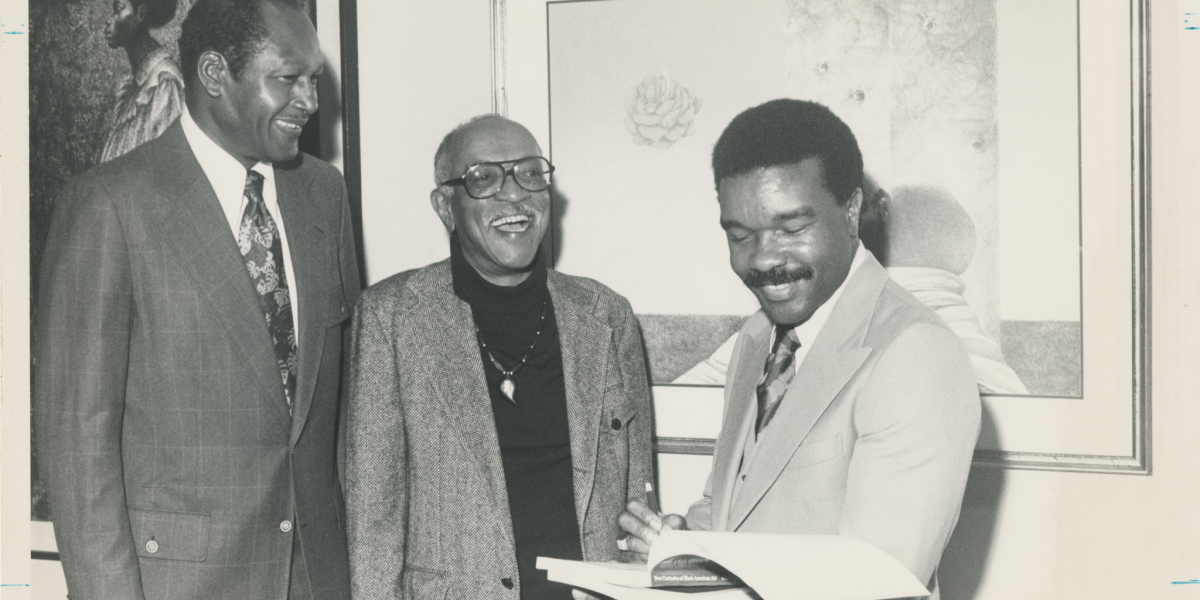 Launching February 2021, a new crowdsourcing project led by faculty and students at the University of Maryland College of Information Studies (UMD iSchool) and the UMD David C. Driskell Center for the Visual Arts and Culture of African Americans and the African Diaspora (Driskell Center) will allow anyone with an internet connection to transcribe the works of the late African American artist, scholar, curator, and Distinguished University Professor of Art, Emeritus, David C. Driskell.

This project will provide a platform to engage scholars, historians, artists, and researchers, alike, to help make the David C. Driskell Papers, a collection consisting of approximately 50,000 items, more accessible and easily discoverable to those interested in broadening the field of African diasporic studies and preserving the rich culture of African American visual art. The collection contains various correspondence between Prof. Driskell and his fellow artists and art collectors, former students, and members of the public who came to know him.

Dr. Victoria Van Hyning, one of the project’s initial leaders and assistant professor at the iSchool, whose research interests lie in the crowdsourcing methodology for helping people gain experience and literacy in deciphering the past, sees this project as an opportunity to address the palpable underrepresentation of people and groups who are major cultural contributors.

On the project’s launch date, there will be about 1,200 digitized works from the Driskell Papers collection ready on From the Page for transcription and review by anyone who wishes to participate. The project team sees the transcriptions of these works as a foundational reference point for helping archives and other institutions figure out how to effectively preserve and share  data gathered from these types of projects to radically improve research efforts.

“These crowdsourcing projects draw participants from diverse walks of life, with diverse interests and skills – every page is usually transcribed, edited, and reviewed by one or more people,” said Van Hyning. Van Hyning partnered with Deputy Director of the Driskell Center, Dorit Yaron, and Archivist David Conway for the Fall 2020 semester to create the Outreach, Inclusion, and Crowdsourcing course as a way of honoring the legacy of Prof. Driskell, teaching students about crowdsourcing and engagement, as well as Black cultural production. They also saw it as an important opportunity to engage the UMD community and the public with the gallery and archives during prolonged closures caused by the pandemic. The project serves an immediate need in terms of engagement, and a long-term need in terms of creating data for future research.

Among the diverse items within the Driskell Papers collection, is material relating to  one of Prof. Driskell’s most influential and signature collections – the 1976 “Two Centuries of Black American Art” exhibition. This exhibition was instrumental in shifting the public’s appreciation of African American art and establishing African American Art as a distinct field of study.

“[The exhibit], which was first organized at the Los Angeles County Museum of Art during the bicentennial year, had significance in terms of assessing what a nation had accomplished in the last 200 years and making sure the contribution of Black artists was brought to the forefront,” said David Conway, an archivist at the Driskell Center, who has been in the process of digitizing the Driskell Papers collection since 2017.

The Driskell Center has been developing ways to continue engaging the public with the Driskell Papers and the Center’s many other collections and exhibits typically on display at the Center’s physical space. There have been several shows hosted virtually by the Driskell Center, including a show curated by Conway devoted to the Driskell Papers back in Fall 2020. A new exhibition, “David C. Driskell’s Students,” opened February 1 and the Center has an event in development for later this semester that will introduce its attendees to the transcription project.

The Driskell Papers crowdsourcing project will launch on February 16, 2021 on From the Page, one of the leading transcription platforms serving cultural heritage groups, universities, libraries, and archives. To learn more about the project, visit the https://fromthepage.com/umdtranscription/david-c-driskell-papers and driskellcenter.umd.edu/collections.