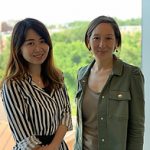 Language barriers can often lead to miscommunication and social exclusion in today’s diverse workplaces. Currently, there are about 27 million migrants working in the United States, while another 42 million workers are employed abroad at U.S. companies.

In an effort to improve communication and inclusion in these multilingual settings, a team of University of Maryland researchers are building a smart machine translator that can immediately process conversations in multiple languages, while also being cognizant of social sensitivities.

“We have very complimentary expertise,” says Carpuat, who is an expert in building complex multilingual translation systems, while Gao focuses on understanding human communication in diverse team settings.

Carpuat and Gao both have appointments in the University of Maryland Advanced Institute for Computer Studies, which specializes in bringing together top experts from multiple disciplines to solve pressing scientific and societal challenges using powerful computational tools.

According to Gao, there is substantial evidence in the social behavioral field that people working in a multilingual environment often face a language-choice dilemma. While speaking a native language like English may maximize everyone’s ability to contribute ideas, it can also lead to social fragmentation and the disruption of information sharing across language groups.

“Language diversity is an increasingly important feature of modern workplaces, and it’s not something people are all aware of,” she explains. “We hope this project brings awareness to the value of language diversity. In future workplaces, people speaking different native languages may be able to communicate in a natural and efficient manner with the help of smart machine translators.”

The researchers are also pushing new boundaries in machine learning by establishing a human-centered evaluation matrix with a focus on social sensitivity, instead of sticking to the field’s standard factors of fluency and correctness.

According to Carpuat, machine translation researchers usually only care if their translation result is fluent and correct. But there are other dimensions that may be more important to users depending on the workplace situation, like how literal or idiomatic the result is, or whether or not it’s in the correct style.

“There’s a whole bunch of criteria. And then depending on what scenario you’re in, each of these criteria is going to have a different weight,” explains Carpuat. “Our hypothesis is that we need a smarter translator that is sensitive to social needs.”

On the social behavioral side, the researchers will also study the optimal way for users to evaluate their experience with the machine translation system.

“For example,” says Gao, “do people really trust the outcome of machine translation? Do they think those are social agents that should share a responsibility with us?”

And if the translation tool makes a mistake, she adds, how do people attribute those errors? “Those are all interesting problems that are worth exploring once we deploy the system into the real-working scenario,” Gao says.

The researchers are first planning to study Chinese or Spanish with English as a language pair, depending on the availability of local speakers that they can recruit. Eventually, they will apply the same technology to other languages pairs.

“Ideally, we would like to develop technology that will work with any language in principle,” Carpuat says. “The promise of machine learning is that as long as we have the data, we can build a system for anything.”

The initial research will be funded by the university’s Division of Research through the Maryland Catalyst Fund(link is external), a program that incentivizes and enables high-end innovative research on campus. The team received a New Directions award, specifically for faculty pursuing a new line of research.