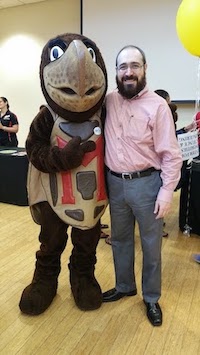 As the Internet was beginning to make huge changes in the way we worked and lived during the late 1990s and early 2000s, Vedat’s keen intuition about the changes it would bring to information science prompted him to leave his doctoral program in engineering at Istanbul Technical University and travel to the U.S. to obtain his PhD. in Information Science at SUNY- Albany in New York, graduating in 2003. This was the same year that we launched our MIM program and began establishing our college’s expertise in the emerging world of data science, which appealed to Vedat. He joined the team in 2003 as one of our first MIM lecturers. Vedat’s background also included operational management, course development, and program planning – skills that led him to be a key leader in the development of our undergraduate program and to his role today as the program’s director. In this role, Vedat leads a rapidly growing staff team and develops curriculum, policy, and collaborations to advance the program. He shares that the greatest moments of reward are the Commencement Ceremonies and seeing the excitement and pride of the graduates. Outside of the iSchool, Vedat can be found immersed in a book, Rubik’s cube, or any pop culture medium from the 1980s.